At the beginning of April, you might remember that I had been working on a special "secret project", which I could not reveal on the blog.

In any case, it was a pattern submission to Knitty, for a project I designed using one of the sweaters I knit which had been languishing in the "rework" pile. I did not hear back from Knitty for a long time, which, according to their web site, means it might have possibly been in the queue for consideration..... 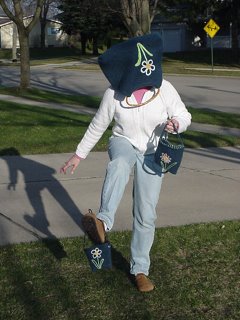 .....until today, that is. Here is an excerpt from the response I received:

"Thanks so much for your submission! We were inundated with designs this issue and had to make some touch choices, so unfortunately we won't be able to use yours. It didn't help that someone just published something quite similar in concept at the whipup blog. But at least that means you're on the right track! :-) "

I checked out the whipup blog, and there is, indeed, an idea of the same genre which was submitted just three days ago, long after mine got into the Knitty inbox, but soon enough to be referenced by Knitty's publisher in my rejection notice. And so that's how it goes sometimes.

I just posted the Satchel Oopsy Daisy Bag Pattern to our blog, however, so check out the "free patterns" section on the sidebar... Also, in the next day or two, I'll try to post directions for the other two bags shown, as well.