First of all, no, I don't think your jaywalker socks are ugly! Of course, I have a rather bright color sense, so as Knitting@Lunch observed, we have to take that into consideration. Just wear them when you're feeling daring and fun!

As you may recall, I went into December with ambitious goals and a bit of a cocky attitude. I have been properly set in my place, however, and now I'm just knitting for survival. I believe that I started to go seriously awry the second week in December, when I finished the second front. That was around the 10th. That left me with plenty of time (so I thought) for 2 sleeves. One front took me about a weekend, and the second front took me about 4 week days - so those two pieces in a week. Now all I had to do was do the 2 sleeves in a week, and I'd go into the weekend of the 19th ready to block and finish. Pretty much a whole week for other small projects!

Then reality set in. Math hit me first. Each of the fronts called for a cast-on of 56 stitches, knit even for about 15" and then do decreases. I assumed sleeves were about the same amount of knitting or less. However, each sleeve called for 51 stitches, and then INCREASED to 81 stitches and 17" long, then some decreases. Turned out that was a lot more knitting. And before that really sank in, while I was riding high, my sil called and asked if I wanted to go out for dinner, shopping and taking the little girls to see Santa. Honestly, none of you could have resisted this. Look at those faces!!!

Sunday brought computer issues that required my attention, and some unexpected babysitting, and while I got through all of that, the bottom line is that the first sleeve took me NINE days, not just a weekend. (Of course, there were parties and tree-decorating and all that other stuff too....)

So last Friday, the 19th, I finally finished the first sleeve, and knocked out a quick soap sweater to fulfill a request and give me a break. It just took an hour, so not a big deal. OH, plus sometime during the sleeve process, I was unable to resist the temptation to spend an hour or so on a crochet mitten, but it was a time when I couldn't have concentrated on cables and increases, so that's ok. I sat down Saturday around noon with the ribbing of the sleeve done, ready to start increases. I had carefully marked and observed where the increases should start, and I was really quite proud of myself for being able to replicate my (cough)design mods(cough) from the first sleeve. I even remembered to do mirrored increases, K2tog on the right and SSK on the left.

No way to make that a design modification, so I ripped back and tried again. I was really focused this weekend tho, and so 48 hours after I cast on for the second sleeve, I was pinning the sleeves out to block. I had blocked the fronts and back on Saturday night, and I've sewed the pockets in, so tonight I should be able to sew the seams, and start picking up button bands and neck edges.

So yes, I think I'll make it, no thanks to my space-cadet brain, but that happens sometimes. I may even get those crochet mittens done! At this point, ANYTHING else that gets finished is just a bonus. ;)

I hope this finds you well, and that you avoid the coughing that your kids are doing!

Posted by Designated Knitter at 8:12 AM 2 comments:

Is this sock ugly?

Greetings and Dear Cynthia,
How is your Christmas knitting going. It didn't sound crazy to me at all. Really. Ahem.
I would *love* to see a photo of your Cassidy cardigan. I'm thinking about making that one, too, and I just know your mom is going to love hers after you finish it and gift it to her... (Christmas 2009?)
I am sitting home on a "snow day" today. The University of Wisconsin-Madison is *closed* for the day, due to our blizzard warning. (The last time the UW cancelled classes was in 1990.) City buses, which usually go by our house several times an hour, aren't running, and even DH has the day off because of the weather. We've cleared about 15 inches of snow already, and it continues to drop steadily. It's beautiful right now; tonight the winds are supposed to increase (I think the heavy winds are required if they're going to call this a "blizzard") and the temperatures are expected to drop considerably. I am so thankful for a cozy home.
I'm still knitting little hats and mittens (ornaments). I especially like the red mitten having the cable, and will probably knit it's mate to tie on a gift for a friend of ours who is also a knitter. I still have to decide the fate of the others yet, though they will probably also accompany little gifts... 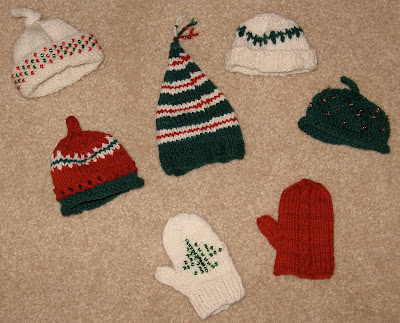 I also started a pair of Grumperina's "Jaywalkers" using my Kaffe Fassett Design Line Regia yarn. Cynthia G gave me the idea of using a chevron type pattern for the striping yarn, and I had actually been wanting to do that for a long time, so here's where we are so far: 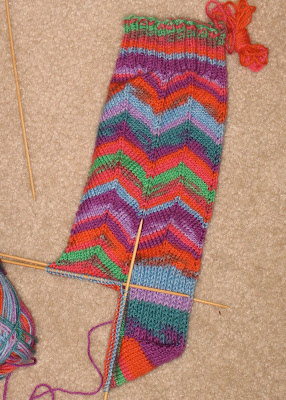 Question: Is this sock ugly so far? I need to know...honestly. I'm thinking about ripping it out. I think the heel looks especially odd the way the colors ended up...
Also, you will notice that I am knitting this sock from the top down, and now, a few rows past the whole heel thing, I'm already wondering if I'm going to have enough yarn. AAUGH! I've definitely morphed into a "toe-up" sock knitter, and you will hear my scream all the way in Indiana if I run out of yarn just shy of the toe... I'm knitting the largest size, because of many reports from other knitters that this pattern lacks stretchiness. I'm able to get it over my heel easily, though am glad I went with the larger size.
And so, while we are debating the ugliness of that sock, I also started another one. 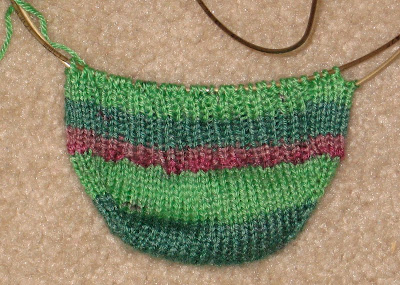 I think this is a prettier color scheme, and it might have even been a better choice for the Jaywalkers pattern, though I'm content to knit this one in 2x2 ribbing on the instep and ankle.
Well, I do have some studying to attend to today. I still have two weeks left of the craziness, and the fun of finals begins one week from Saturday. Nothing like a day off today, though, to re-group and get caught up on some things. I've missed you all, and am thankful for your blog posts so that I can keep up with your goings on even though I've been a blogging slacker.
Warm regards,
Laura (YarnThrower)
Posted by YarnThrower at 10:26 AM 6 comments:

Here, for your amusement, (and to answer repeated requests by Knitting@Lunch!) is my current list of knitting to be completed by December 26th!
1. Lace Kneesocks: These are for my sil, and are not a gift. She requested them, and bought the yarn for them last summer, and I've procrastinated and now the cold weather has arrived. They are ALMOST DONE! I have just 2 lace rounds and some ribbing left on the second cuff (toe-up) so I think I can finish them tonight.
2. Sweater for my mom: I finally settled on a pattern by Chic Knits, and I've been in a KAL at Knitting Today. The group is meeting on December 10th to working on sewing up the pieces, and so that would be great if I could do that. However, um, well, I have the back done and I've started one of the fronts...and there is less than a week to go. Sure, I can knit 2 fronts (with added pockets) and 2 sleeves in a week! 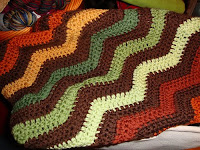 3. Blanket for my dad: This is the one that amuses Knitting@Lunch the most. (Altho she also swears that my mom is getting a VEST!) I've been working on the blanket since summer - it was my baseball project for quite a while. The thing is, tho, that it's crochet, which is obviously faster, and it's already pretty big. I was shooting for a very generously wide and long ripple afghan, with the ripples going along the horizontal. HOWEVER, if I make the ripples vertical, it is be enough to be a normal sized afghan, so that can be done with just a few hours of work.
4. Ok, just for fun, in my fantasy world, where I actually get more than the first three things done..... My Godson's 2nd birthday is December 26th, and I'd like to make a "Rocketry Sweater" for him. I have most of the yarn in my stash.
5. I have a great-niece whose birthday is December 22, and so maybe I could knit her a hat and mittens? Crochet maybe??
6. A couple of Soap Sweaters for little gifts.
7. Some fingerless mitts???
Oh hush. What's Christmas knitting without impossible goals???
Today is Knitting@Lunch's 4th Blogiversary, and this was her present! Stop on over and wish her a Happy Blogiversary and tell her just how delusional you think I am! ;)
Keep Knitting!
Cynthia (aka Designated Knitter!)
-- Post From My iPhone
Posted by Designated Knitter at 5:51 PM 2 comments: