I Am Not A Slacker 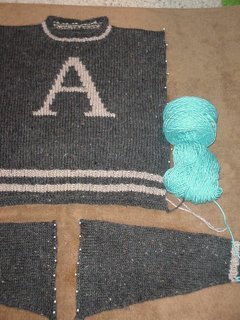 is all I have to show you today. Because we have this blog and it causes just enough pressure (nothing unhealthy, mind you) to share some knitting progress, I actually got my butt in gear this morning regarding the Big A sweater, wove in all of the ends that can't be put into a seam (in other words, the zillion intarsia ends are taken care of now - well, not exactly a zillion, but for one big letter made of only one color, there were surprisingly MANY ends), washed it, and now it is blocking.

The teal yarn is what remains of the three hanks of Cascade 220 I bought for the little project I can't reveal at this time. I've gone through approximately 400 yards of it so far, and I expect the completed project will consume a total of roughly 550 yards, so I'm well on my way to finishing it and resuming work on the **ahem** several other projects which have been sidelined.

I've also started to consider what large project I might like to work on this fall. Front-runners are this in colorway 2, this in the green, or this for my dh in the colorway which has wine trim. I'm also reminding myself that I have two shawls which I (repeat after me) ABSOLUTELY WILL FINISH BEFORE STARTING ANOTHER PROJECT. Also, my three-year-old also wants a "sweater to match his big brother's except with no buttons or zippers", and just the thought of making another two Fana sleeves has diminished my already fleeting sanity. In any case, I'm pondering.....

And now, back to it!
Warm regards,
Laura (YarnThrower)
Posted by YarnThrower at 10:31 AM