Knitted (and crocheted) items don't live forever. There's just some abuse which won't be weathered. For instance, the garbage disposal: 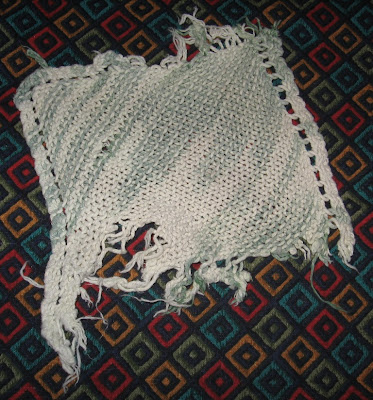 Perhaps it was something subconscious, because I've been knitting gobs of dishrags lately? I was washing the dishes last week, and I couldn't find my dishrag. Where is my dishrag? These things don't just DISAPPEAR! Finally, I looked into the drain, and discovered, after I had been running the disposal until it no longer sounded like there was "stuff" in there, that my dishrag was "down there". Ahem. I'm a great fan of using things over again, and fixing/mending, but this is going to be tossed into the "big garbage disposal" out in the garage.....

In another instance, the hot pan on the acrylic crocheted trivet/hotpad (note the "burn" marks in the middle): 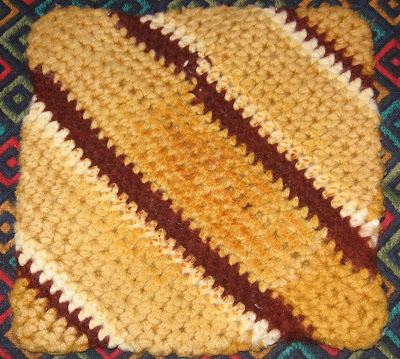 Half of the pre-damaged hotpad became mine on the day dh and I got married more than ten years ago... A few weeks ago, I picked up a pan from the table and this hotpad was hanging underneath it, and I literally had a tug of war with the pan in order to get the hotpad off of it, then I scraped the bottom of the outside of the pan to get rid of the acrylic residue. I'm sure there is a lesson in there someplace about acrylic, or crochet, or putting pans on yarn items, though I don't know exactly what it is except from now on, my pans will rest on my nice ceramic tile trivet.

Anyway.....in real life, dh is on his way driving to North Dakota for a relative's funeral. It was an unexpected death, and somebody very close to his mom, so it will be difficult for everybody there I'm sure. The boys and I stayed home, because we thought that driving 20 hours in the span of a 40 hour trip would be too much for them (and us). So, I'll take tonight as an opportunity to do some organizing around the house. (I'm putting that in print here, as though somehow it will make me more accountable and motivated to actually get something de-cluttered around here.)

In other news, I bought two new knitting books, 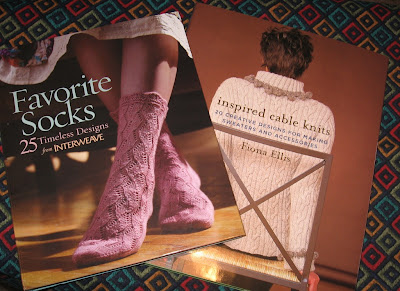 and they arrived today, so as soon as I send this post off to cyberspace, I'm going to kick my shoes off and eat some bon bons (do any stay at home moms really ever do that??), and page through these books for a few minutes this afternoon.....

I, too, have had both of those things happen to me and my dishrags / trivets. I like the universality of it: These items come into the world in the same ways -- they go out in the same ways, too. Or, I think way to much. ::grin::

I don't know about bon bons, but I do snarf down the malted milk Easter eggs whenever I get the chance!

Usually, the only things that end up in our in-sink-erator are spoons and green scrubbies.

Bon bons?
More likely the crusts of the grilled cheese my son won't eat (why do I feel the need to eat up those pathetic edges after I cut them off? WHY???)
Anyway, 2 GREAT books--I have some issues with Fiona's yarn specs, but there is no question it is one inspiring book!
(Oh, I just crack myself up)

I really like the sock book. I bought a copy myself a little bit ago. I haven't knit anything out of it yet, but I bought 2 kinds of sock yarn this month (and my mom bought some for me to knit her). I need to finish the pair in progress (finished the first sock this weekend).

There is nice stuff in the Inspired Cable Knits book, but I don't really need more patterns until I work my way through some of the yarn I already have. I decided to purchase Melissa Leapman's Cables Untangled instead. Enjoy the books. I love new books. I bought Nicky Epstein's Knitting Beyond the Edge this weekend.