I went to the Wisconsin Sheep and Wool Festival, in Jefferson WI, yesterday, but more impressive -- I made it back home again. I submit this: 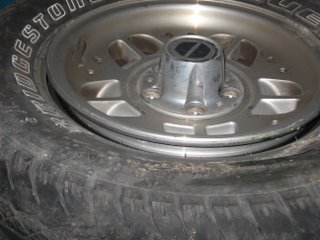 Though it maybe doesn't look so bad lying here in the back of the pick-up truck, when it was actually on the left front of the vehicle, the rubber part of the tire was pretty much not centered on the metal rim of the "wheel", and the metal rim of the "wheel" actually had contact with the ground. This was only discovered as my friend, whom I'll call "Karen", and I were in the truck, and I was backing the truck out of our parking spot. And actually, it was discovered by a family parked nearby, telling us we had a major flat. Hmmm.... No wonder it was so difficult to back out of the parking spot. (Incidently, just prior to parking there we had waited for a car to vacate this same parking spot, and actually watched THAT car totally ram into the bike rack on the RV parked right behind it, messing up the car's bumper and tail-light. Woe to the unluckly person who happened to park in our spot after us...) Though it seemed unfortunate initially, Karen and I realized how fortunate we were, because:
45 minutes later, we were gingerly driving back to the Madison area. This week, new tires! 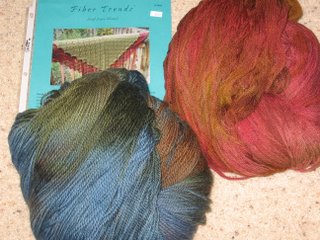 Anyway, the Briar Rose Fiber booth totally caught my eye, and you're not going to believe this, but I splurged. The pink/brown/gold yarn is light DK weight, hand painted, merino, and 1500 yards! I was very excited to see such nice yardage in hand-painted and thicker than lace-weight or fingering. I'm going to make myself a nice cardigan out of that. And, I had to get the blue/green yarn, as well, because it was just "meant to be"... For some time I've been looking for something to use to make the Leaf Lace Shawl in a light worsted weight, which requires 850 yards, and, well, guess how much is in the hank shown? Again, nice yardage for being hand-painted and worsted, and up close and in person I just love the colors!

Well, not exactly "Thelma and Louise", but an adventure, none-the-less. One of these years, you and I should attend this event together.....though perhaps it's best if we take your vehicle.

Glad you all had help from that family! And what nice finds at the fair-- enjoy :-)

Oooo...my fingers are itching to knit that yarn!!