After three years....off the needles! 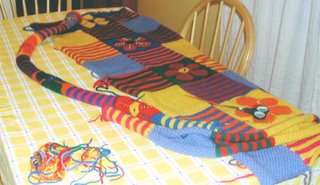 Whew!! That's all I can say. Whew!! (Well, that plus the nasal rinse thing sounds really bad!)

I finished the knitting on the blanket with intarsia flowers. It's not fair to say that it took three years to knit. There was a huge gap in there. I started the blanket during my niece's senior year in high-school, intending it as a graduation present. I had 3 of the 5 strips done by graduation, and sewed them together so she could get an idea of how it would look. My second goal was to finish it by time she moved into her dorm at college. I think I might have had the 4th strip done by then. That left the final strip with 4 intarsia squares. That was 2 years ago.

I had never done intarsia, so I didn't know what I was getting into. You know how they tell you to wind bobbins of yarn for the colors you'll use? That seemed like a waste to me. How would you know how much to wind? What if you had lots of little bits left over? What if you didn't wind enough and had to join more yarn? Of course, I found out pretty quickly that I might need several chunks of the same color, but even then, I just wound a quick little ball and moved on. I cannot express the mess that was the back of those squares. My yarn was ALWAYS tangled, and I couldn't really even tell if I was getting things twisted correctly.

I told myself that it was lanquishing because with all the colors, it wasn't a portable project. The truth is I never touched it even when I was knitting at home. I didn't know which was worse, the thought of more twisted yarn or the guilt of not finishing it. And all those ends to weave in!

Well, the next niece is going to be a senior this year, and there is no way that I can shop for yarn for her blanket until this is done. When I finished the baptismal shawl, I vowed to not knit on anything else until the blanket is done. I set a goal of finished by September 1st. And I stopped being so stubborn. I wound bobbins of yarn, and was surprised by how much that helped. And knitting backwards instead of purling meant that I never had to "turn" the work and so the strands didn't wind around so bad. I can't believe how much better it went.

Getting it off the needles this afternoon was great. After supper, I visited with my sil and wove in the ends of the two strips that are not sewn together. I'll finish the ends in the sewn together strips before I add the last two. Then a crochet border, and blocking. Whew.

Then I have some socks in mind, and a scarf...perhaps another shawl. And I've already told my next niece - no flowers!! :)

The flowers are so cheerful! I can certainly respect how much work this was to complete. I had the same questions about winding bobbins on my project. I ended up sticking pairs of dpns through full balls of yarn to keep them from rolling all over the place. The result was not completely satisfactory when I had more than three colors going at one time.

Oh, my word! Look at that blanket! It's absolutely gorgeous and such an achievement. You should get a medal. The recipient had better take good care of it :)