Why yes, I am addicted

First, regarding laundry... I have to agree with Elizabeth, who commented about laundry being her Sisyphean task. I had to consult the encyclopedia and the dictionary in order to fully understand, but now that I've learned it has to do with a king rolling a rock up a hill for all of eternity, or similar futile yet endless tasks, it sounds about right. Just one more comment, and then I'm done with the laundry topic (for now) -- Nobody notices when the laundry happens to be going smoothly and clothes magically appear in closets and drawers all over the house; everybody notices if there is a shortage of even one thing, say, underwear, for example...

I completely finished one slipper for dh for Valentines' Day by sewing on the leather bottom and threading the lace through the cuff. 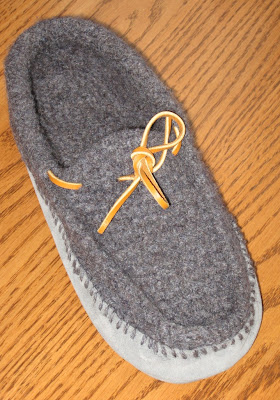 It is slow going. I am using a really sharp tapestry needle (instead of the dull chibi I typically use for seaming) and I have a hole in my thumb and two in my left thigh to prove it. Ouch! Anyway, I've had a set of these slipper soles on my felted clogs, and they have lasted years, even with daily wear from September through May...

I did not let the fact that I already have several projects on various needles all over the house deter me from starting Sapporo. 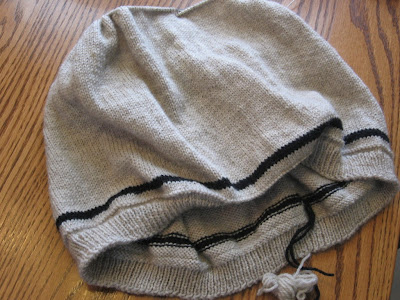 I cast on for it one week ago today. When dh asked me what I was knitting, I told him a ski sweater for myself. He said, "I think you're addicted." I was not surprised in the least that he said this; I'm quite surprised it has taken this long. By my calculations, I've been addicted since November 1999, when I was pregnant with my first son... Anyway, I stand by the fact that knitting is still cheaper than smoking, and though I've never smoked, if I add up $4.00 per day for cigarettes, and the fact that I don't have to actually pay a therapist for my "therapy", I'm way ahead. There are worse things to be addicted to. If you think this looks so far like a hem facing, a turning ridge, and a sea of stockinette, then you're right! In another couple of inches the colorwork begins. Also, this pattern has a shock cord which goes through the casing formed by the hem, so that explains the two eyelets.

Well, my four year old is watching Scooby Doo, so I'm going to join him, with my mindless stockinette knitting... It's still the perfect temperature outside to be knitting inside, though we're supposed to be in the positive double digits today! That means my six year old will have recess outdoors today, and we'll all be the better for it.

Yes, the Little Emperor finally got outdoor recess for the first time in forever. Thank goodness!

The slippers look great. Maybe you need to wear a quilting thimble, though? I have one that has a leather pad you use to protect the digit that does the pushing. Or is it the digit that's on the receiving end that's the problem?

Gorgeous moccs! I use a rubber band off broccoli to help pull the needle through. Saves wear and tear on my fingers!

Thanks for showing close-ups of the hem facing and the turning ridge. I have not enountered those yet in my own knitting but I love the finished look when it is completed.