Liver, eh? At my house, there is no chance I'll reach for hamburger and accidently get liver. I don't keep it on hand... Congrats on getting your Dale sleeve completed. May your second sleeve end up being exactly the same size as your first one.

Thanks to a worksheet my first grader brought home from school the other day, I **finally** realized that "tink" is "knit" spelled backwards. I've known what tinking is, and have spent many hours **enjoying** (though I don't think that is *exactly* the right work for it) tinking, but it's origin never occurred to me... Maybe I should go back to first grade to pick up some knitting basics.

This same first grader told me that he wanted to learn how to knit. I've purchased looms for birthday gifts for some nieces as they've turned seven years old, and my son told me that he wanted a loom, too. So, during our snow day last week, I got him one, along with some yarn, and though it doesn't appear to be a compulsion for him, he does work on it regularly. 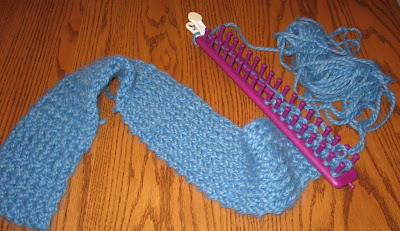 This is his progress after about a week. He's a natural. Is there such a thing as a knitting gene which I might have passed down to him?

In knitting news, I got to 11 inches on Sapporo (and I'm *not* going to make the mistake of measuring it more than once) and then started the colorwork. 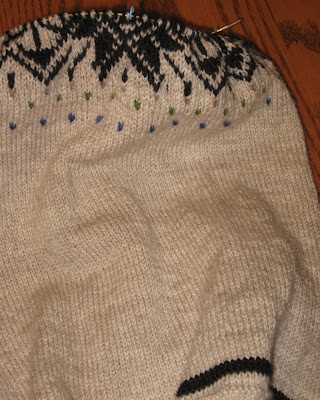 I'm trying to knit it loosely enough so that the colorwork part doesn't pull in. I'm using the same size needle, so just trying to make sure my carries are loose enough...

I'm also trying to finish up some Valentines' Day projects over here. In my efforts to further reduce my stash of polar fleece, I'm making each of my kids a fleece hoodie. I put a "made with love" label in each one, and that is probably what they will appreciate the most. 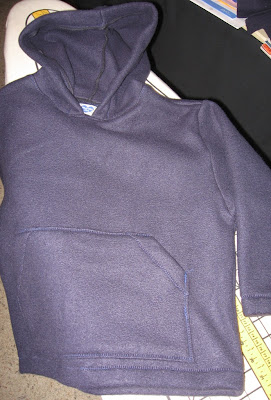 It seems like I have some sort of compulsion to keep my family members warm...

My little boy asked to be taught to knit last summer and really took to it! He is a typical squirmy little guy and especially likes to knit while I'm reading to him and his sister at bedtime. He made himself a sweater out of Lambs Pride Bulky and his toddler cousin a sweater for Christmas!
If you had asked me, I would have said it wouldn't work, but I remembered reading about schools that teach everyone to knit while quite young (Waldorf? and in Sweden?) and just went for it!
He even is doing a mitten on 2 circulars right now.

These kids knitting put me to shame! I need to go work on some projects to save face....

Both my guys have had some knitting lessons, but neither of them sticks with it.

You're making very fast progress on the sweater!