I trust you had a nice trip home, and am so glad you were able to visit, short though it was, but fine because we were so efficient going about our knitting/sewing business!

I finished one of the felted mini bags (because I had to give it away this past weekend): 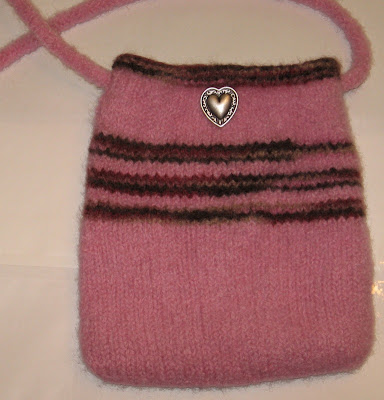 (The stripes don't all look uniform because the contrasting yarn had some pink in it, which doesn't show up against the pink background of the main color.) Oddly, and the first time this has ever happened to me, this particular bag ended up being slightly felted shut (front and back almost fused to each other) when I pulled it from the washer. A little tugging and yanking made things okay, though I wonder why the three others I felted at the same time didn't have even a hint of such a thing.

I started the cabled section of Ibenholt, and the directions said something like "work pattern A, then pattern B, then pattern D, then pattern C, then B, then A, then C, then A, then D....etc...you get the picture. So, I used coil-less pin type markers with little labels stuck on them to indicate which chart is to be worked in each section as I go across the right side rows: 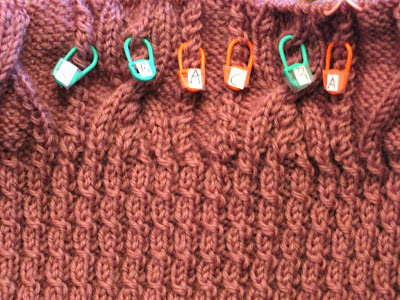 It's working out to be a great system, though I have to say that this step did *not* ensure that my gauge would be correct, and this sweater was on its way to becoming way too big for me... After three inches of concentrated cable work, I finally figured that out, so I ripped back to the ribbing and have settled on size five needles. (Oddly, to achieve gauge, this sweater has sleeves knit out of size 6 needles, body out of size 5 needles, and pattern calling for size 4 needles. I think I'm having gauge problems because of the moss stitch and the cabled area...though hopefully things are on track now!) Also, I have no more coil-less stitch markers available, so I won't be starting any other complicated projects until this one is done...

While we were visiting dh's family this past weekend, we went to the National Eagle Center in Wabasha, MN: 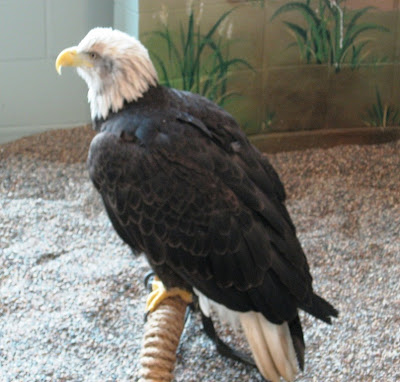 There are four eagles living there now, placed there because they are unable to fly because of injuries sustained by being hit by cars. I learned a lot about eagles there, and the efforts which have been taken over the years to regenerate eagle populations.

I still have a pile of mending, though I made a start by putting patches on a pair of my jeans. (When I was in the work force, I never got holes in my knees. After staying home with my kids for eight years, I have holes in the knees of lots of my pants.) When I was buying some patches at the fabric store, I noticed some patches made out of standard woven printed fabric which were very cute, flowery or polka dotty, so much more fun than just a square piece of fusible denim. They were a bit pricey, however, so I wouldn't splurge for them...but I thought that with a little "wonder under," I could make my own. So, I started mending a pair of my jeans. I first cut a piece of "wonder under" big enough to cover the holes on both knees of my jeans. I lightly fused the "wonder under" to the fabric -- but only for a few seconds. If you go more than just a few seconds on this part, you'll never get the paper backing off in the later steps: 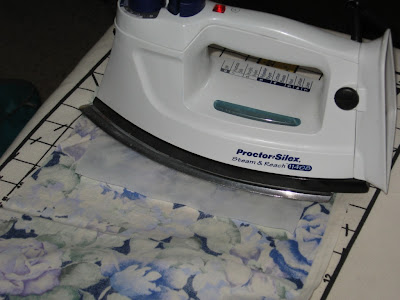 Then I cut my patches to be the right size and shape. (I made boring squares with rounded corners, but I'm thinking flower shapes might be cute.) Then, I removed the paper backing of the "wonder under", and had a fabric patch which was fusible. I ironed this fabric patch on top of the holes in my jean, this time keeping the iron in place for about 15 seconds: 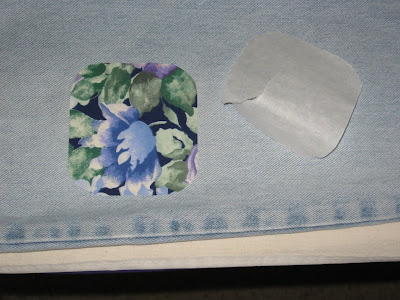 For reinforcement, I overcast stitched around the edges of the patch: 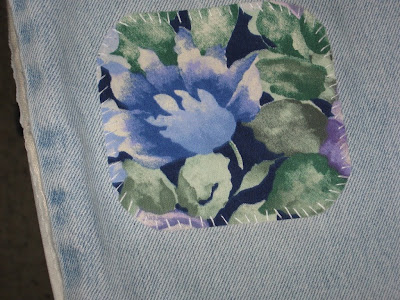 I know that nowadays kids leave big gaping holes in their jeans. In fact, one of my nieces had her brother shoot holes in her jeans with a gun before her senior picture was taken last year so she could achieve "the look." However, my knees get cold, and the holes just keep getting bigger, so I like a nice patch to keep things tidy. Does this make me old or sensible?

Finally, here is "my" backpack: 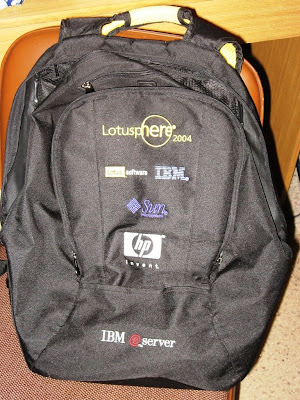 I use the term "my" loosely, because technically it belongs to dh. He was at a trade show a few years ago, and all of the attendees got a nice backpack like this one. It has a separate padded area inside to carry a laptop computer in addition to a roomy book compartment, and many pockets with zippers. He put it in the closet and never used it. When I started taking classes a few years ago, I started using this backpack. It's very functional, but I just really don't like having all of the propaganda on the front of it. I couldn't justify getting a new backpack just for such a cosmetic reason, so I decided to try to personalize it to better suit my tastes. "Wonder under" to the rescue! 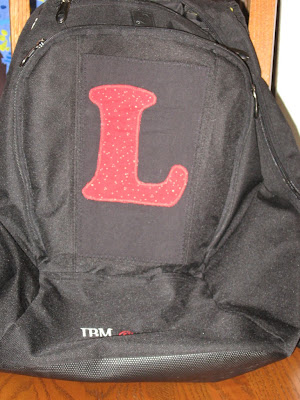 Now when I look at "my" backpack, it seems cheery and makes me smile. (Perhaps it is a little dorky, too, but it matches my bike with the huge yellow basket on the back in the style of "dorky.") Plus, I'm sure that NOW, dh won't ever want it back :-)

Love the patch job! I have the same problem with the knees. Of course, when I was driving a desk in grad school, it was the butt that wore out!

I'm not Miss Experienced with felting, but I believe different shades of dye do effect the feltability of a fabric. Perhaps this one had more grab because of that. Or could it be the other items in the washer at the time?

I like your system for keeping the cable charts straight.

I think the patches are cute and practical, not old at all (but then, I'm getting up there...).

Cute little bag! I think it just depends on the yarn. Some felt like crazy and others are more moderate about it.

Love the retooled backpack! It's dorky in a "cool" way.