YES! The 1776 Liberty colorway of Lorna's Laces. Too weird we're both knitting the same colorway at the same time! Mine is the Shepherd "Sport", so goes pretty fast. See?! 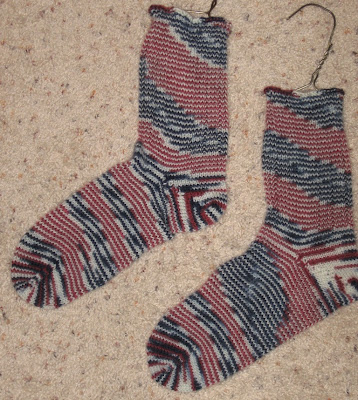 A pair just completed and shown here on my fancy schmancy sock blockers.

While at Stitches, I attended one class. The topic was Bavarian Knitting. Basically, Bavarian Knitting is similar to Norwegian knitting in that it is done mostly in the round, cutting the fabric for armholes and cardigan front edges, etc. It is different in that it is mostly one color, so the steeks are one color and steek stitches are all twisted knit stitches (made my simply knitting into the back of the stitch). Also, for the armhole edges, stitches are bound off at the bottom of the armhole, then several stitches are cast on just above that which become steek stitches. The patterning of Bavarian knitting is largely twisted knit stitches against a background of reverse stockinette. These twisted knit stitches can form cables, or travel, etc. The twist in the stitch really makes the stitches "pop" out from the background. Here is a photo of the swatch I made in class, in which the yarn was carried across the back of the swatch after each row in order to simulate knitting in the round, then those strands cut after the swatch was done: 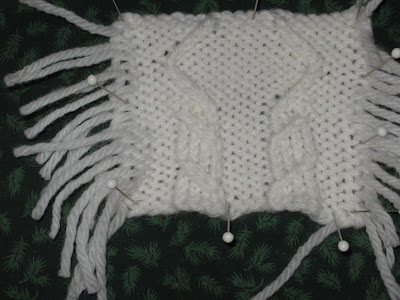 Here is another swatch we worked on in which we started with a "steek" made of twisted knit stitches, then used a crochet hook to secure the steek area prior to cutting. 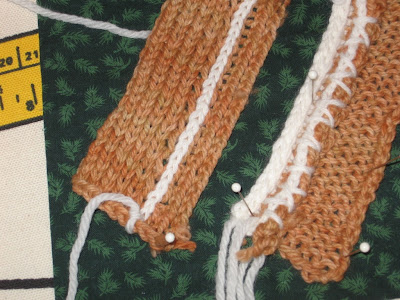 This step is not considered part of the classic construction, as our handouts gave credit to Rick Mondragon for the crochet technique. (Rather, sewing along the side edges of the steek was mentioned as the technique classically used......) In any case, it was good for me to try the crochet method of securing stitches (swatch on left side of photo). With that done, the steek is cut. We then used applied I-cord along what would be the finished front edge of a cardigan. Finally, we used overcast stitches to secure and neaten the cut edge (swatch on right side of photo -- though I was in a hurry at this point -- it was just a swatch, and I've done the technique many times before on real projects.....). Anyway, for the most part, a good class, though I think in another year, I might opt for purchasing a book instead of attending a class, as the skills taught in the class weren't really new ideas to me.

I got started on the vee pullover for dh. My swatching yielded 6 stitches per inch, though I'm starting with a sleeve just to make sure I got it right. 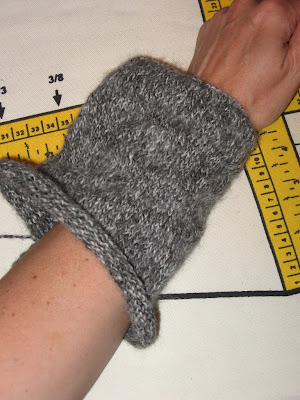 So far, so good, so this project is off and running. It will have hemmed lower edges, which seems to work well in keeping the lower edges from curling (since even the garter stitch on my swatch was curling like crazy...).

Well, tomorrow we are celebrating the boys' birthdays with our extended families. Since their birthdays are only two months apart, we generally have only one celebration to save everybody the trouble of traveling here more than once in such a short time period during very busy summers. This means that today I am baking a cake, cleaning the house, and making salsa with the many tomatoes I have which are ripe. Here is the drawing I was given for what the cake is supposed to look like: 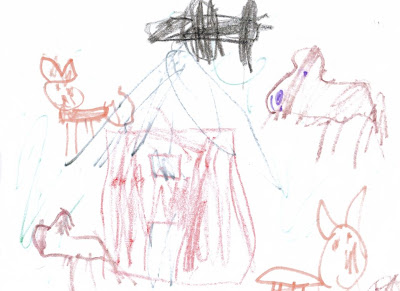 Basically, it is a farm scene having a jet flying overhead. (The boys were trying to capture an interest that each cousin has -- one likes horses, one likes pigs, one wants to go to the air force academy, etc.) I'll show you the finished product in my next post. Could be interesting.....

Have a great weekend!
Warm regards,
Laura (YarnThrower)
Posted by YarnThrower at 7:57 AM

Good luck with that cake!!!

I cannot WAIT to see that cake!

It sounds like you had such a blast at Stitches! I'm impressed with anyone who can deal with steeks. They make me cringe like crazy. I honestly don't think I could do it.

Hope you weekend is going great!!