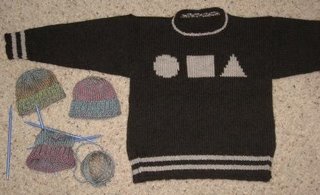 Well, for somebody who **isn't** doing any Christmas knitting, you certainly are getting a lot done!

I have one finished Christmas gift sweater to show you! This one is for my four year old, to match his big brown eyes. 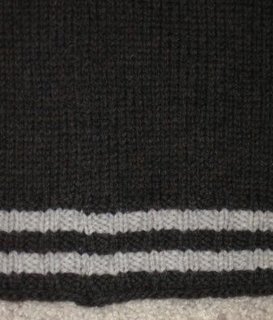 When I changed colors in the ribbing for the stripes, for the first row of each new color, I knit one row, then continued with the ribbing as established on the second row of each new color. Otherwise, there would have been little purl bumps of contrasting color showing at each color change, which sometimes is a look a person might be going for, but I just wanted plain solid stripes on this sweater. It "seems" to take forever for me to sew "seams". Somebody once told me that at the first inkling that something looks a little bit funny as you are seaming, rip it out right away. Not sure that was the best advice for me, because it's often three steps forward, one step back as I'm sewing along..... Also, I might be a little bit out of practice.....

Also shown in the first photo are two and three quarter premie caps. I read about a project on BaxterKnits, and having an extra skein of yarn, and now some extra time (I'll explain in a minute), I thought I'd knit as many as I could get out of one skein. The total will be three for sure, possibly four.

Finally, I'm filled with a great sense of relief right now. I had my fourth unit test last night in my Developmental Psychology class. The final was scheduled for next Tuesday, and it was to be cumulative, covering 25 chapters in a very large book, and worth 40 percent of our grade. And so, after our test last night, the teacher asked the class, "Do you guys want a final exam?" I was stunned, but at least the other people in the class had the presence of mind to say, "No". And so it is. No final exam, and I am done for the semester! I can't tell you how much this frees up my time this week!! Which is a good thing...because today I took a little look around the house, and beginning tomorrow, I must start addressing some of the chaos, because it is affecting my emotional well-being. Every once in a while, when things seem out of control, it's as though I reach a threshold, and I think I'm there, and so tomorrow I'm going to spend some serious time trying to get a handle on all things domestic.

Perhaps I'll try to sew another sweater together, too. That also helps alleviate some of the chaos I'm feeling...

What a cute sweater, Laura, and I love the premie caps. I don't understand what you mean about the striping. Okay, you're knitting in color A. You change to color B. You knit one row, and then change back to the ribbing, instead of continuing to rib after you change color, is that it? Adding a row of all knit does it?
Catherine

What an adorable sweater! Are you getting close on the other two?

The sweater is soooo cute! And thanks for squeaking in the hats, I don't know how you get as much done as you do.

Oh, yay! The finished sweater looks great. You're really clicking along on the Christmas knitting. I feel like a slacker :)

Congrats on finishing the semester! Lots to celebrate.