There is the weaving in of gobs of ends: 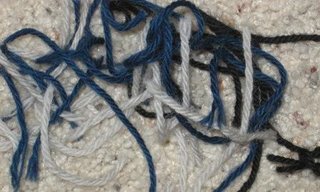 There is the hemming: 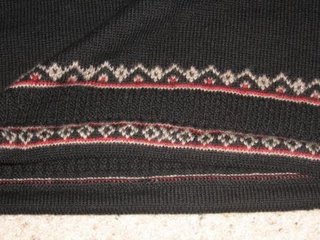 And there is much more not yet done, future blog material, for another day or month or so.

In the meantime, a knitter still must have 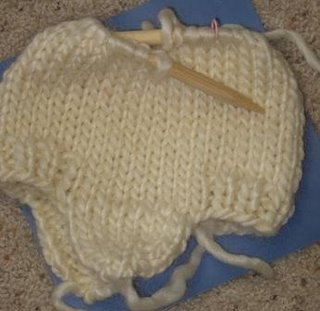 projects to tote around town, so watch this space for several little projects over the next few weeks, made from stash yarns and providing almost instant gratification. The first one is this little Elf Cap from Handknit Holidays. (I checked this book out of the library, and now am trying to make several of the nice little projects in it before I must return it.) I think if I owned the correct needles (and it's hard for me to believe my needle collection is actually not complete), I could have knocked this out in two hours or less. However, it turns out that **finding** size 15 double pointed needles (in order to knit the pointy top of the cap) is the hardest part of the project. In fact, I called one store (which happens to have a feminine name rhyming with "low fans" and which is open until 10:00pm during the holiday season) to find out if they had some. The nice person on the other end of the line told me that they carried three different kinds of them, but they all had "a little string connecting them together at the bottom". Of course, those won't work, because I was looking for the double pointed needles which aren't connected to each other (not having the word "circular" on the package), and which have at least four to a set..... I know Lakeside Fibers has them, so next week when I'm on that side of town..... It's not like I'm going to run out of other things to knit around here.

Anyway, time to get this place cleaned up a little bit. And then, there will be the blocking of the blue "circle square triangle" sweater parts. Have I mentioned that I really don't enjoy finishing? I really, really like the part in which it's finished, but the finishing, not so much...

You can always make some double pts from 10 mm wooden dowels from the home center or hardware store. I think 10 mm dowels will still fit in the extra large adjustable pencil sharpeners, or you could whittle them down. Then sand with fine paper and wax with parafin.

My beginner status will be showing again, but I'd like to ask anyway -- how do you hem your knitted sweater? On a machine? By hand? I have not had any patterns that call for that yet. I can imagine it would make a nice line and eliminate the stockinette curl.

I'll need to thank the writers here again for teaching me about life lines. That has been a most useful tool for me.