Greetings and Dear Laura:
I didn't used to have SSS.* I remember when I first started knitting socks, I knitted complete pairs all of the time. I had at least 5 or 6 pairs to wear at any given time! I don't know what happened to me, but the last few years I have not knitted many pairs of socks, and I've struggled with the second sock each time. It was just grit and determination that got me through the second hexagon sock last summer. I did the first Norwegian Rose sock pretty quickly, but I didn't do the second one until 6 months later. I have 2 socks currently in my UFO's - two different socks, so I have the first of each partially done.
And now I'm trying to knit a pair each month! Yikes!
I didn't finish the second Norwegian Rose sock until Feb 10th, at which point I realized that I had 18 days left to knit a pair. That meant 9 days per sock. (Not really 9 days - I cast on at 10:30 on the 10th, so that wasn't much of a day!) The first sock took me until the 22nd to finish, and today I cast on for the second sock. I got 4 of the 8 rows of ribbing finished during lunch, which isn't really much. 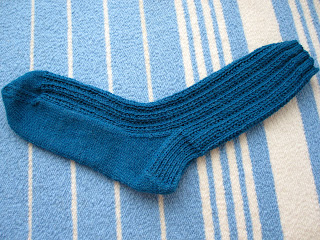 And I'm really not feeling the love for this second sock. I just DID this sock! Maybe I'll love it more if I knit it fast and get it over with?
Yes Lauren, you can pick a project for March. Just don't tell me about it until I get February done, ok??
Also, what's with the ice? And snow? 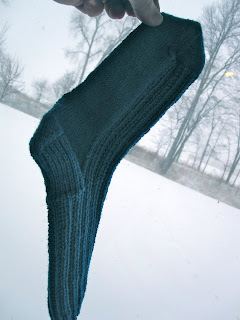 Woohoo! I have the perfect thing for March :) Let me know when you're ready for it!!!!

I've found the perfect solution to the dreaded SSS.

Toe-up socks, Magic Loop, 2 at a time. Not as hard as it seems - I knit my second pair (ever) of socks this way and wooohoooo! Plus, when I used the stretchy bind-off to bind off, I was DONE! No Kitchener stitches to deal with.

First pair on DPN's took me almost a YEAR to get done. Second pair took me a month - and that was with about 2 1/2 weeks of no knitting on them because life got in the way of knitting. YMMV

Knitting socks are perfect for this coming Christmas season.

You've been awarded the 'Stylish Blogger Award'! Please see my blog for details.