I posted! And I kitchenered!

We'll need to take a minute to let you and Knitting@Lunch and any other loyal readers recover from the shock of it all. Here's a picture of some yarn while you catch your breath....... 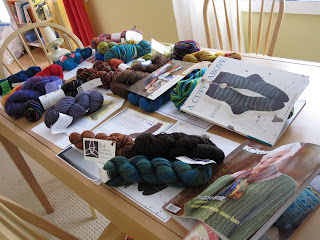 I have been enjoying reading your posts tho. You make such beautiful sweaters, and I'm always impressed with how many you actually finish. And the Heilo mittens look great - altho that post gave me a scare. When I read about the proposed changing the name of the blog, I thought you might be going to drop the Pickin' since I post so rarely! Whew!

Anyway, I would surely not object to "Pickin' and Throwin' and Rippin'" after my struggles with my February Lady cardigan. However, once I got past that evil instruction to - well, let's just post it here.

swingy by decreasing the number of increases here. Others have left the increases off the

sleeve stitches, to make narrower sleeves. Knit it to fit you! See “notes on sizing” below.)

Seriously? That one - I think on the 4th or 5th try I figured it out, and it had to do with adding some 'fake increases' so that it worked out. (None of those numbers divide evenly into each other!) But that was a long time ago, and I've been plugging away on the lace body, and it turns out that eventually you get near the end. Who knew? Another couple of lace repeats and 2" of garter border and I'll be ready to move on to the sleeves. 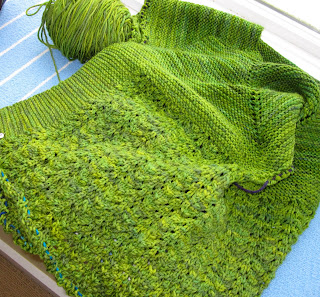 My goal for this year is to make 12 projects out of stash yarn for me! Mostly socks/sock yarn, but there are a few other projects as well. The picture at the top of this post was the pairing of yarn and patterns, which I finally got around to this weekend. I had been collecting the patterns and choosing the yarns from my Ravelry, but it remained to do the actual packaging. Now I'm all set - there are actually 18-20 projects in the basket. Later this week I can randomly pull out one for February!

For January, I had decided to work on a UFO, since it was getting later in the month. Last week I worked on the second sock of the Norwegian Rose pair that I worked on last summer. Remember the 1st sock was displayed at Stitches, in the Knitting Today booth? 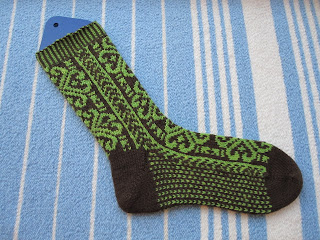 I had most of the foot of the other sock done, and I'll finish turning the heel yet this evening, so it should be done soon. However, last night it occurred to me (!) that it wasn't going to make it by the end of January, so I grabbed a chunky stash yarn and made a quick hat for myself. I've had the yarn for a while, and a hat is what I intended and needed, so that was a win! 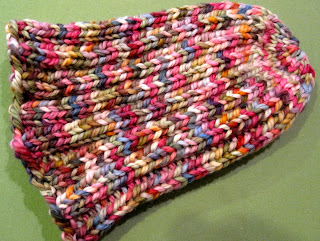 Well, that's a good update from here - oh wait! I mentioned that I Kitchenered, didn't I?? (I believe that my long-standing aversion to Kitchener grafting is well documented over the life of the blog.) Knitting Today got a shipment of these really cool keychains that document the anatomy of a sock, and brief instructions for grafting the toe. (I know that it isn't complicated, but I always manage to get confused part way through.) It was cute and colorful and I'm a real sucker for such things, so I picked one up for my notions bag. 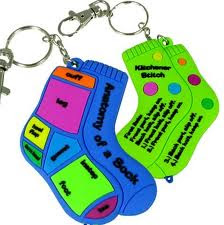 Last Thursday, Sweater Night was cancelled and so a few of us met at Starbucks. (Much less driving in the snow!) As I got out of the car, I realized that I had left my knitting on my desk, and so I had nothing to do. Nancy generously offered to let me graft together a fingerless mitt that she had. I was bored enough that I agreed (I did barter for a double-chocolate frapa-thingy) and I got out my little keychain. It was very useful! It was so brief that I was able to keep track of where I was, and we were both pleased with the result. In fact, Nancy borrowed it to graft the second mitt and reported that it worked really well for her as well. So, those of you who are intimidated by Kitchener - get yourself to the Knitting Today store or website and get one of the magic "Grafting Lucky Charms!

Posted by Designated Knitter at 12:01 PM

Prepackaging projects, what a good idea!

I love the colors in your hat - warm and cheerful (in defiance of all the snow).

Welcome back to blogland :) Don't let your next post wait too long!!!!

I'm with you Lauren! What I don't get, though, is why a fingerless anything needed to be Kitchenered? I'll have to go back and see if I read that wrong. And, sort to new the stash enabler yesterday - NOT! But, I can also be the UFO enabler ;).

I did pre-packaged projects for this this year too! I printed out my patterns and shoved them into bags with the yarn. That way I can just grab and start something. It's really nice.

What yarn is the hat made of? It's so pretty!