Summer of slippers (update) and appendicitis

Greetings, and Dear Cynthia,
I have a free moment today, because the rest of my family is out of town right now.  School has been extremely busy, but great.  Only a week and a half left of the summer session...
First, status on the Sand Hill Crane family which hangs around in our neighborhood: 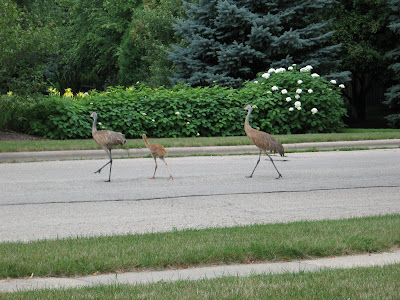 They walk through our yard once or twice a day, going from pond to pond in the neighborhood, and eating flowers on their way (which has been annoying to our neighbors).  These birds are great fun to watch!  The little guy is getting so big!
Okay, so when I last wrote, I had some ballet slippers knit but not felted.  Here are two pairs of ballet slippers, both knit to be the same size, one pair felted and the other pair not felted: 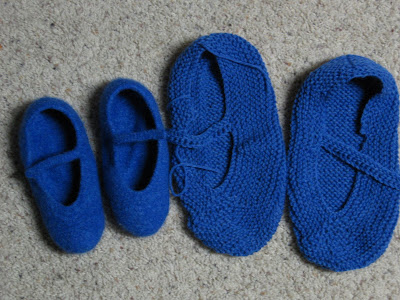 Here is another pair, which I felted at the same time as the ones in the above photo, and which were knit to be a smaller size, but which ended up being about the same size: 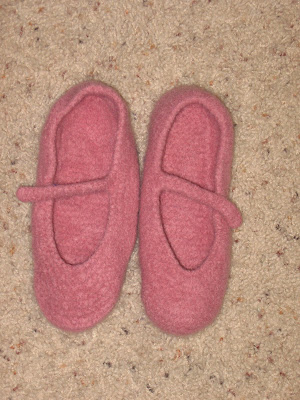 I am wondering if that is because they are a lighter color??...since lighter colors often don't felt as well?
And, I made two sets of clog slippers (one for my nephew, and one for my 6-year old) that look a lot like this: 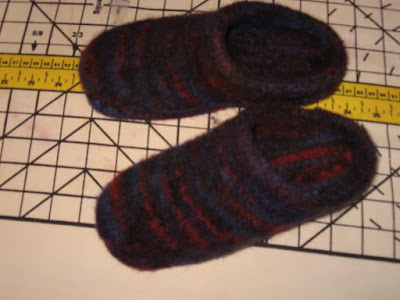 I wanted all of these to be anti-skid, so I did some research.
I read about using puff paint on the bottom of the slippers, applying it as cute little shapes, which then dries and is non-skid for a short while, but which would have to be re-applied every so often.
I read about using some stuff that can be purchases at Menards which people use to dip tool handles into in order to achieve a rubber coating on them, but this looked messy, and if I messed it up, there was no way to get it off of the slipper (and to be honest, it looked rather industrial, and not like a cozy slipper).
I read about using caulk (as in caulk like you apply around the top edge of a bathtub), but this also looked quite messy and industrial.
I finally decided I'd go with some anti-skid fabrics.  I tried two types. 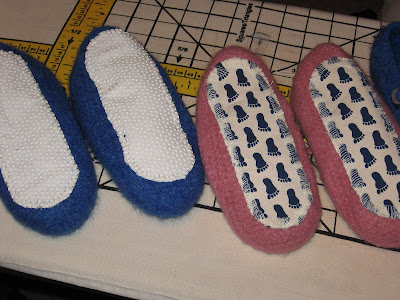 The type which has the little raised foot shapes was made out of canvas, having edges which unravelled significantly, so I serged around the edges in order to contain the threads, prior to sewing them onto the slipper bottoms. 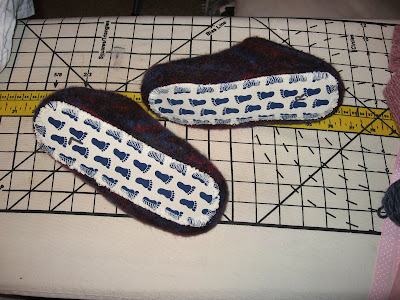 Yesterday was the big party, and I gave away four pairs of slippers to all of my nieces and nephews, and they were LOVED by all of the recipients (they all put them on their feet and started walking around with them on outside). 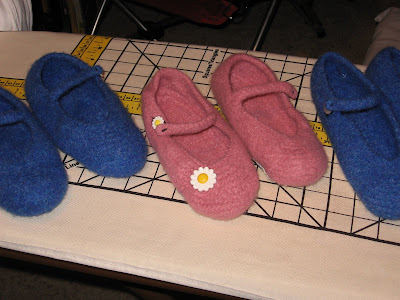 Also, by some strange twist of fate, they all *FIT* the feet of their intended wearer, too!  I felt like I won the lottery, except without all of the money...
In unrelated news, a few weeks ago, my brother noticed a slight pain in his lower right abdomen.  Then he put in a new floor.  Then he ran a 10K race.  More than a week later, he thought he should maybe have it checked out by the doctor, but he had two days remaining to work in order to get a perfect attendance (for the quarter) award, so he went to work for two more days, and finally took himself to the emergency room.  They determined that he *may* have an appendicitis, so they took him to surgery that night, where they realized that his appendix had ruptured, who knows how much earlier, but sometime during the prior week, and his insides looked like hamburger.  So, after a much larger incision was made to scrape out the infection and rinse his insides, he ended up with a six night hospital stay.  He lives in the area, so I was able to visit him in the mornings and walk around the unit with him...  He's doing much better now, and we're all breathing a huge sigh of relief.
I've actually finished some other projects, and have made some progress on some languishing sweaters.  More on that very soon!  (Did I mention that I have only a week and a half left of school for the summer?)
Have a great August!  (August?? -- already??)
Warm regards,
Laura (YarnThrower)
Posted by YarnThrower at 5:17 AM

1. Nice work on the slippers! I would feel like I won the lottery too if they all fit! You rock :)

2. OMG is your brother insane?!?? I can't imagine going that long and being in pain like he MUST have been! And running a marathon??? Good Lord!!!!!

2. Great slippers! That's a neat idea for the non-slip, I've been wondering how to affect that for my mom's slippers.

3. Seriously - brothers! I'm glad he's ok, and didn't decide to slap some duct tape on it for another week! (Who knows, but they seem to think it fixes ANYTHING!)

LOL to the cranes! How fun to have some so close! Might not be so fun if you have a really beautiful garden though;-)

Love those slippers- how did the antiskid hold up after running outside???

That was a nasty scare your brother gave! So glad he's recovering!

Good luck with the rest of summer school...

It just amazes me that you have urban cranes. I love to hear them fly overhead in the spring and fall, but that's the closest I've ever been to them.

Wow, those clog slippers look like something I could live in. Very cute! And how fun to see your giftees all wearing their new slippers. It is so nice to knit for people who appreciate it!

And your brother sounds incredibly tough. I can't believe he was able to do all those things with a ruptured appendix!

Love the slippers! I'll have to make some!

Glad your brother is okay.

Oh, lovely slippers all! How wonderful that they all fit their intended recipients.

I hope your brother's healing is quick. But honestly, how he managed to avoid going to the doctor that long...