The fourth day of Christmas

We had a great Christmas, in spite of the fact that both kids have been sick, each with an illness different from the other. The sigh of relief I sighed yesterday when both kids were well again was quickly replaced by a sigh of irony today when my six year old started exhibiting symptoms of the illness his brother had just a few days ago. In any case, still, a great Christmas, for which I am very thankful!

DH's sweater fits him great, and the new zipper 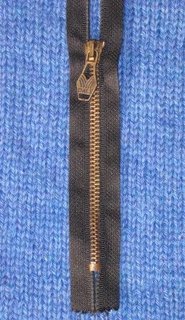 for it arrived on the 26th (which was the day **after** Christmas). I'm sure the zipper's arrival here was catalyzed by my sewing in a "temporary" zipper so that dh could actually wear the sweater; if not for me taking that step, I imagine I'd be waiting until Valentine's Day for the Dale zipper to arrive. DH really likes his sweater! I know this, because he told me he likes it voluntarily and without me first asking, "Do you like it?" After ten years of marriage, I know that this sort of unsolicited expression of "like" is truly saved for only those items which really impress him, so I think the sweater is a hit. Also, I think it was actually a surprise. In spite of the times I thought for sure he had seen it lying around the house, he never figured out what I was doing.....something about seeing sweater parts lying around the house all the time and always thinking they are for somebody else.....so apparently laying sweater parts in plain sight is enough of a common occurrence to actually be camouflage.

In any case, I'll show the zipper installation in the next week or so, and then we can all rest well knowing that the Hardangervidda will no longer have to be discussed. I know I'm a little tired of it.....

With all of that out of the way, I started a new sweater 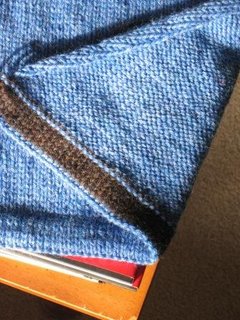 for myself. This is The Perfect Sweater pattern, though as a typical knitter often does, I'm changing the pattern, to make it even **more perfect** for myself. For Cascade 220, I like a looser gauge, so I'm working on size 8 needles and getting 4.5 stitches per inch, for a less dense, more drapey fabric. Of course, this throws off all of the numbers in the pattern...so I'm doing some calculating along the way. Also, just for fun, I'm using a contrasting hem. This is the first time I've ever used a provisional cast-on by knitting into a crochet chain. I love the technique, even when I was "un-zipping" it and it snagged on one stitch (which was due to the fact that I had knit into the wrong part of the single crochet chain for that one stitch while casting on). Anyway, the explanation in the pattern is great, and I love the way the hem looks. The back is done, and I'm just starting the front... 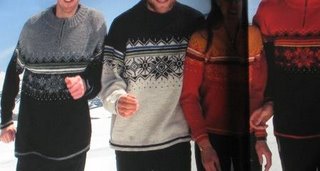 category after just finishing up the Hardangervidda, and sitting here with a nice gift certificate from my dh to a nice yarn store, I decided that I'm going to make myself a nice Norwegian sweater. I bought the pattern booklet for the 2007 Norwegian Ski Team (Sapporo), and I'm going to make the colorway shown in this picture which is second from the left. It's a great pattern, including hats and sweaters for infants through adults, and options for making raglan or dropped sleeves, so I expect to get a lot of use out of it. It's complicated enough for lots of interest, but appears to be less of a monster than Hardangervidda.....

Well, I hope this finds you well and enjoying the fourth day of Christmas!

Definitely a cause and effect with the zippers. And the good one is here! I'm glad he liked it, so I won't need to rearrange his kneecaps or whatever it is tough guys do!

I'm sorry, I won't be at Last Sat Knitting this week. I'm going to a wedding party (not the actual wedding) near Chicago on Sat.

A wonderful success!
Thanks for the perfect sweater pattern. Learning picot edging is on my list of things to do in '07. The crochet chain worries me a bit. I don't know the first thing about crochet.