Today is not just Mothers' Day; it is also the day of my first final exam of the semester. I can see the light at the end of tunnel, and after three more tests and handing in a paper, I'll see the light even more clearly! Anyway, Happy Mothers' Day to any mothers out there who happen to be reading!

There's been some knitting, but not a lot. Here is a rectangle I made for a friend, whom I'll call "Jane," who started a patchwork knitting project maybe a decade ago and is in the process of sewing it together for her daughter who turns 18 next week... It is kind of a neat idea. Years ago, she asked many of her friends to each knit a 14"x14" square, and she supplied the yarn and a rough idea of how many stitches to cast on. Each friend then knit a square in the pattern of her choosing. In the past week or two, Jane started piecing together the blocks, and realized that she was short one block, so she asked me to "pinch knit" (did ya' catch that quasi reference to a term used in your favorite pastime?) a square for her, but since many of her squares didn't exactly meet the dimensions, Jane asked if I'd make mine 10.5"x13". So, here's the square (technically a rectangle) I made: 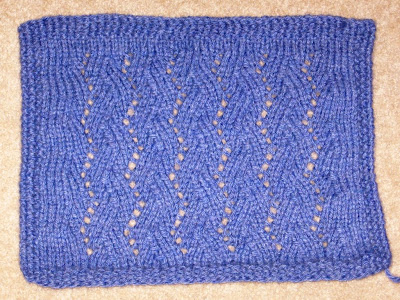 I was supposed to write a note about why I picked this particular pattern. To me, this lacy zigzag is feminine without being too delicate, having a clear direction though able to drift to the right or left for the greater good....you know, stuff like that.

Also, a dishrag to have on hand for a little gift as needed: 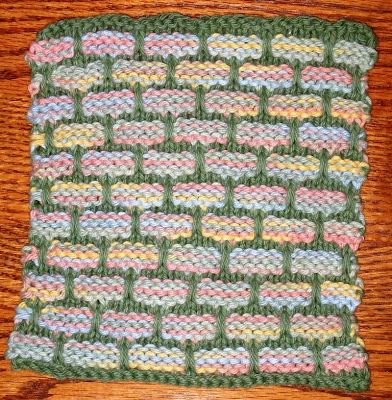 Finally, I mentioned I'd start talking about the many benefits of exercise. A lot of people already know that there are cardiovascular benefits from aerobic training. The cardiovascular system delivers the oxygen to the cells that need it during exercise (muscles). This is only one piece of the puzzle, however. The cells themselves are modified over time with repeated exercise bouts. For example, people who train regularly will have an increase in the number of mitochondria in muscle cells. Mitochondria are the "power plants" of the cells. So, when the heart delivers the oxygen to the cells, now the cells themselves extract the oxygen from the blood more efficiently, too, reducing the required load on the system at rest. So, it's not just about the "delivery" of oxygen; it's also about "extraction" of oxygen once it gets to its destination. Isn't that cool? Is anybody still awake? Walking is great exercise, by the way!

It's warming up, so I've been biking a lot more. It's a welcome change from running, and it takes about the same amount of time to get home from school as if I'd taken the bus -- with the added benefit that I'm not tied to only the times listed in the bus schedules. Plus, biking just makes me feel like a kid...

Here's a really fun puzzle we've been working on: 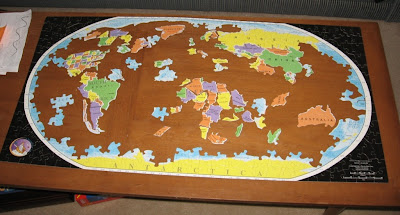 And, my six-year-old's version of a "house of cards," which I told him I would post on "the blog": Okay, so I'd better start studying for the exam I have tomorrow!

I hope this finds everybody well!
Warm regards,
Laura (YarnThrower)
Posted by YarnThrower at 3:34 PM

Good luck with the exam!

The afghan block is really pretty!

Exercising...I walked for nearly two hours today, and it was fun too, unfortunately I don't do it every day...


Good luck with your exams.

That's a cool idea for a blanket for your friend's daughter!

So do you have to take summer classes, or are you on vacation after your finals?

Love the lacy zigzag stitch! Look at all the fun you guys are having! That's a great puzzle and I've never seen a more elaborate house of cards! Kudos to your 6 year old! Hope your final school work goes great! Then do you get a break? Will we see you at Sat. Knitting?

Hope the exam went well! The afghan block is lovely. Love your analysis of the lacy femininity, etc. :)

I'm trying to get my exercise groove. I used to stroller-walk with a friend, but now Lilah insists on walking herself, and she walks so slowly that it's not remotely cardiovascularly effective for me. It's something, sure, and better than nothing, but it's not what I would call exercise. She doesn't nap anymore, so I can't pop in an exercise DVD while she sleeps, and she's really distracting if I try when she's awake. I really like your plugs for exercise--they make me try to find ways to actually get some!

I love the puzzle! I used to love doing puzzles. Can't wait till Lilah is old enough.