First, Happy 4th of July! It's a bit on the gloomy side here today, so we haven't put our flag out yet because it looks like it is probably going to rain. However, a day off from the routine is a day off from the routine! No kids' programming today! DH has to go to the office for a little while, but he can set his own hours today....so, for the most part, a relaxing day...

Second, your blanket looks so wonderful! AND, YAY FOR YOU for getting it done on time!! It sounds like you're having a fun time deciding what to work on, now that you are freed from that huge project! Fun to hear about your stash thought process. Makes me feel a little bit more sane...

Thank you to our commenters for your strong encouragement to try using a circular needle for the Turkish cast on. On my very next pair of socks, I'm going to try that -- I promise! For now, I continue working with the pattern in the current (Summer 2007) issue of Interweave Knits, for a "better toe-up sock". I have one sock finished, the other just past the toe. 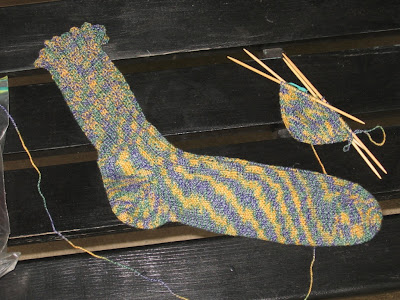 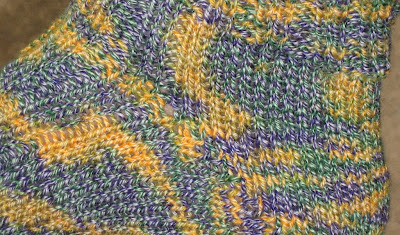 This pattern teaches a method that utilizes yarn overs instead of wraps and turns. I particularly love it for the first half of the heel, because there are no wraps! YAY! It got a little confusing for the second half of the heel, because there is some manipulating of the yarnovers so that they are oriented properly, and also some purling through the back loops of three stitches at a time, which sounded like a horror to me initially, but which ended up being just fine....once I figure it out. Both sides of the heel match nicely, and I love the fit. It seems to me that doing the yarnover method basically achieves a result quite similar to knitting the wraps together, only the way it is executed is different. 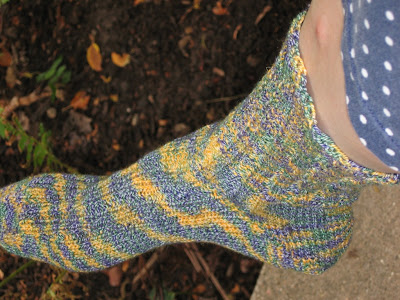 Not sure which way I like better. Maybe I'll arrive at a conclusion after I do the yarnover technique for a second time on my current sock..... (Please disregard the huge welt that is on my leg, as shown in the photo above. I think it's from a bug of some sort..... I have two words regarding that -- "topical Benadryl")

AND, my class started this seek -- Physiology of Exercise -- and already I'm up to my ears in glycolysis and other bodily processes which serve to convert the food we eat into forms of energy our muscles and brains can use. I just really love learning about this stuff, and I think it is partly because for the first time in my life, I've managed to keep up with an exercise regimen for over nine months in a row, averaging three workouts per week. It's helped my cholesterol and triglyceride levels, too. My HDL (good cholesterol) is 73, and I've been reading that having a high HDL is more important than keeping the total below 200 (my total is 244 -- high cholesterol runs in my family). I still have some dietary things I want to work on modifying in order bring my total cholesterol down, but it's a good start, and my doctor isn't concerned. Anyway, I digressed..... This class is going to be stealing away some of my knitting time for the next five weeks, so it's a good thing I've been getting you all accustomed to posts about socks, because I have a feeling that's what I'll have to show you in the coming weeks.

Right after that in mid August, of course, is our planned meeting/excursion to Stitches Midwest, so I know we will have LOTS to talk about and show on the blog after that!....well, for me it will hopefully be something more than socks. Perhaps the Mystery Stole 3, which I think is going to be the project I'll work on while on the bus on the way to Stitches.....because even though I joined the Yahoo group, realistically I won't be able to work on it until my class has finished.

Well, I think I've rambled long enough! I hope you have a great day!

I totally emphasize with you on the high cholesterol thing. I just want to scream when an old doctor of mine told me I needed to watch my diet and exercise more. More? The sad thing is, I exercise more and eat better than many people I know, and it doesn't even budge the total cholesterol number. I need to focus on ways to increase my HDL too. It is like some of these doctors don't even believe you.

The heel looks very nice. At some unknown time in the futue I'll have to expeirment with it too.

Great sock! I'll be interested what you decide regarding your preferred technique, since I'm a relative sock novice.

I have family history of high cholesterol, too :( It really stinks, but it's great to focus on what you CAN do (raise HDL), so I'll have to try and do that more.