Must Have Cardigan Progress

I'm a bit behind these days, though am going to share some halloween photos, anyway:

I dug out my "standard" duck costume again:

The boys went as Pokemon characters, so I just sewed a little vest out of fleece for each of them, and they embellished their costumes with little props, so not very labor intensive for me, and they were pretty happy to participate in the whole "design" process. (I don't have any photos to show of the boys, because I'm paranoid and like to keep their faces off of the air.)

I've had a couple of grueling weeks at school, though my next test isn't for another week, so I have a few days to catch up on some other things (like blogging)! We have a neuroanatomy online quiz roughly once per week, and here is a sample of one of our practice questions to prepare for the online quiz:

Which statement is TRUE regarding the neurological deficit(s) that would be present following a lesion of the shaded area in the right brain stem?

Sometimes it takes me five minutes just to figure out what I'm looking at... The material is a bit convoluted/complicated, but quite relevant to some of the deficits a PT would regularly see in a clinic or hospital.

I've been plugging along on the Must Have Cardigan. 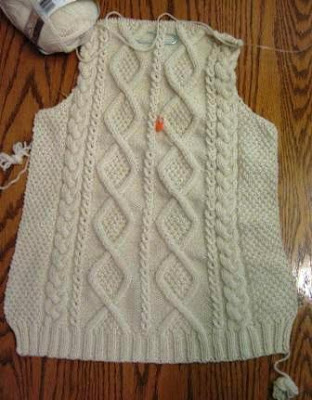 Shortly after I started the back, about four inches into it, I was having the "it's going to be too small for me" panic, so I went ahead and soaked it, right on the needles, and blocked out that first four inches. I'm happy to report that it should be a good size for me, though the partial blocking is why the bottom looks so much wider in this photo. I'm also having problems with the looseness of the stitch immediately to the left of the skinniest pattern. Thank you for your tips on how to fix that; I was so far into the thing already, however, and I decided I wouldn't be able to notice it on a horse driving by it at 15 mph, so I left it as is, though I do plan to try your suggestion when I'm doing the fronts. Back almost done, and one sleeve completed: 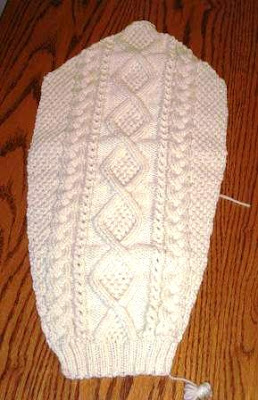 I have some crazy idea I'll have this done in order to wear when we travel to visit our families during the Christmas season. Yeah, and I'm going to sew three matching fleece jackets for my dh and boys. A girl can dream...

I'm so glad the election is over, though it's odd to watch tv and not be bombarded with propaganda, saying terrible things about somebody, and then calmly voicing over with "I approve of this message."

Well, time to get rolling here today. We don't have much planned, though I'll easily fill the day getting caught up around the house and for school. With the flurries we've had the past day or two, and the coldness, I'm thinking a big pot of chili for dinner, maybe with some homemade pretzels...

Have a great weekend!
Warm regards,
Laura (YarnThrower)
Posted by YarnThrower at 5:55 AM

Your duck costume just makes me smile and smile!

Good luck with the tests, I'm sure you will do a great job.

Oh, the Cardigan is so pretty. It'll be lovely.

Hang in there with school. Sounds like it's going wonderfully.

Molly Bee said...
This comment has been removed by the author.
1:36 PM

Love the cardigan! You can get it done by Christmas! It is the season for miracles! I believe in you! :-)

Love the duck! It quacked me up! Sorry, that was a fowl joke. (Suspicious lack of urine sample cup around his neck however! :-))