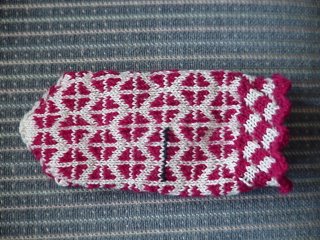 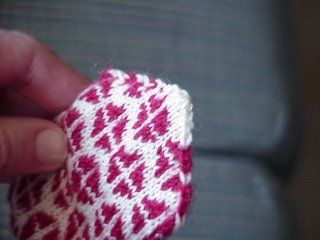 f yarn from all of those needles and figuring out which needles I was supposed to be holding than it was about actual knitting, so this is sidelined for a day or two, until I am motivated for it again. In any case, knitting the fingertip utilizes a technique called the "one wick decrease". It's kind of a snazzy technique, and one which I've never done before.

We are going to a water park tonight. When I was a little kid, it was all about the swimming, and that's how it is for my kids right now. They are very much looking forward to the trip, and to spending some time with one of their Grandmas. For me, it is all about drivi 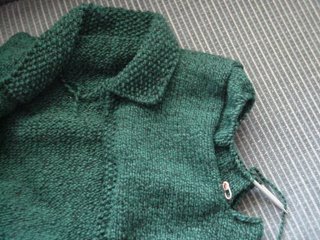 ng two hours to get there, and driving two hours back tomorrow, hopefully in daylight both ways, to facilitate KNITTING! And since my dh and I might actually have a chance for a normal conversation as we are driving, it means that I should bring mindless knitting (and perhaps a list of conversation starters, since we are not used to having so much time to chat :-). And so, I'm back to the Blackberry Ridge Nubby Wool cardigan (bulky weight, size eight needles, a nice diversion from the little mitten project). I picked up the stitches for the first sleeve... I will knit the sleeve from the top down, stockinette, back and forth for two inches (the distance from where the sleeve edge is to where the side of the body is), then join to knit in the round the rest of the way, decreasing periodically as I go. It's been a while since I knit something so mindless, it will be nice to see quick progress and something I don't have to think too much about. And, the only "finishing" will be to sew the underarm closed.

Well, back to my chores.
Ward regards,
Laura (aka YarnThrower)
Posted by YarnThrower at 5:33 AM